And they expected, what? Human bone found at Glenwood-area cemetery

Health insurance should be out of the realm of your employment, except as for a pre-tax dollars benefit perhaps.

President Obama talks about how we’ll be able to keep our insurance if we like it. What if I don’t like the plans that my employer offers for me to choose from and I don’t want the ‘public option’?

Health insurance should be available like auto insurance, home/renter’s insurance, and life insurance. You should be able to get the exact coverage you need, rather than one of two or four ‘one size fits all most’ plans through your employer.

If State Farm, Allstate, Geico, Progressive and others were able to offer health insurance, there’s your groups. If health insurance weren’t tied to your job, you wouldn’t be stuck in a job you hate for insurance benefits that you need. If you are between jobs, the insurance won’t really cost you more – or at least not nearly as much more as COBRA coverage currently does.

A New Axis of Evil

There seems to be a new ‘Axis of Evil’ in the U.S.

It started with those Evil mortgage companies and Banks. All they wanted was evil profit and they stepped on all those regular people and cheated them for evil profit.

Then there was Evil AIG. Profit driven. And then they had the temerity to want to pay bonuses after being bailed out by benevolent government.

Big Pharma is ALL about evil profits.

And Evil Business both big and small. Profits! All they want are profits!

Now as of last night, it’s also Evil Health Insurers who won’t pay for needed health care. But we shouldn’t pay for that which won’t make us healthy. And it’s now also Evil Doctors and Nurses and Hospitals who want to sell you the more expensive Red Pill instead of the cheaper Blue Pill. Evil Doctors and Nurses and Hospitals who instead of giving you some Zyrtec and some Chloraseptic lozenges or spray want to perform expensive, invasive surgery to remove your tonsils because there’s more Profit in it.

So we have Business, Insurance, Banks, Pharma, and now Doctors, Nurses, and Hospitals in our new ‘Axis of Evil’.

You won’t see ‘tort reform’ fought for with as much vigor as ‘health care reform’ (now ‘health insurance reform’ ) even though torts are a very large part of increased costs in both actual health care and with insurance costs. People sue for adverse outcomes rather than actual medical malpractice. People sue because the Blue Pill, even though it’s cheaper, doesn’t work for the patient as well as the Red Pill that’s more expensive. Different people have different reactions to the exact same medication for the exact same malady.

I can no longer take aspirin or non-steroidal anti-inflammatory (NSAID) medications. I get ulcers now. For years nothing adverse happened with those meds. I took them all the time. Side effects, even those that very rare, are listed with medications, in the Physicians Desk Reference, with patient information, in TV and Radio commercials. Some of these sources have more detailed information, some less, some commercials are 2 minutes or longer in order to add in more information. Many people with not have any of the side effects associated with the medication. You need to make an informed decsion and your doctor can help you. Is the risk of a side effect worth the benefit from the medication? In order to alleviate some symptom, is it worth a temporary dry mouth, or bad taste?

For me, the ulcer side effect has made NSAIDs and Aspirin analgesics that no longer have benefit. Pain meds that might alleviate pain in one area, but cause more pain in another have no value for me. Now I’m on Acetominophen based analgesics. There are issue with those too. Big issues with liver function. So now I make sure that liver function tests are done as a part of regular blood testing. Even with taking less than the maximum each day, there could still be issues.

So Trial Lawyers seem to be exempt from the ‘Axis of Evil’ – but then again, Congress seems to be in their pocket. John Edwards wealth was all derived from these types of lawsuits. Cases where science seems to disprove his theories of causation, but juries awarded anyway. His clients got money. And so did he. Lots of it. But there’s nothing about evil trial lawyers. And there won’t.

They Hate Her, They Really Hate Her

On the way home from the water park (awful day for it, cloudy, under 80° and windy – we didn’t stay long) I heard a story on the radio.

AP was reporting that they had acquired some report from some investigator for the Personnel Board of the State of Alaska that said that Sarah Palin was being unethical in taking money for a defense fund to pay the lawyers for successfully defending her against multiple ethics charges.

An investigator for the state Personnel Board says in his July 14 report that there is probable cause to believe Palin used or attempted to use her official position for personal gain because she authorized the creation of the trust as the “official” legal defense fund.

Okay. Sarah Palin is the Governor of Alaska for a little while longer. Sarah Palin was the Republican Vice Presidential candidate in the last election. She is well known. She authorized creation of the trust, but did she sign the authorization as Sarah Palin, Governor of Alaska, and use the official seal? Or did she sign her name as a private citizen like anyone might, even other Governors doing private business might do? If the latter and they are trying to get her for forming or approving of a defense fund because she’s the governor, then anyone in public office can’t do anything in or for private life while they hold office. No opening bank accounts, purchasing homes, purchasing or leasing vehicles, or entering into any type of contract at all because that person would be using their “official position for personal gain”…

I also remember a certain former president who had a legal defense fund. And a former governor who was able to use campaign funds to pay off legal bills here in Illinois while he was still Governor. All those poor rubes who thought they were making campaign contributions were actually paying Blagojevich’s legal bills and it was all perfectly legal.

They hate her. They REALLY hate her.

This has been a really cruddy summer. I should be harvesting some of my tomatoes and certainly some zucchini by now, but it’s been too cold. I couldn’t even get my tomato plants into the ground until June and I usually plant around Mothers’ Day weekend or the weekend after at the latest.

My Sweet Banana peppers are small, but fruiting at least. My zucchini and straight neck yellow squash have blossomed, but then there’s no fruit. It may have been rabbits, so I’ve added some fencing. I have one cucumber on each my two different cucumber plants, one a Japanese cucumber, the other a Burpless Bush cucumber.

My cauliflower, Brussels’ Sprouts, and eggplant are not doing very well yet, but I have hope.

Even my herbs are negatively impacted by this summer weather. The only one that’s doing really well is the thyme.
click any picture to embiggen

We went to see Transformers: Revenge of the Fallen on Saturday afternoon and we went to a Civil War re-enactment on Sunday. Both were very enjoyable, but my feet hurt far worse after the Civil War, lots more walking.

Here’s a video I took of Union Soldiers firing artillery near the end of the narrated battle. We were near a speaker so you might be able to hear some of the narration.

too funny (and true)

Once in a thousand years…

I Received a Take Down Notice For Mohammed Cartoons

On Friday, June 26, 2009 I received a take down notice from a police group in Mumbai, India. I reproduce the email in full here:

This office is enquiring a complaint wherein cartoon articles on alhaa and islamic religious personalities for eg. Mohammed and wife aisha are created and posted. They are making insulting remarks against muslim prophet and other personalities of muslim communities. You are requested to delete/remove block below mentioned suspected and malicious link and articles on your websites.

This is exactly what I received, with all spelling, grammatical, and capitalization mistakes intact. The only change I made was in the url for the image. Entering it as given in the email was returning a 404 error anyway so I have replaced part of the url with […].

The email was sent from officer at cybercellmumbai dot com. That site states that it is the Cyber Crime Investigation Cell, C.I.D., Mumbai.

The picture that is so offensive is this one: 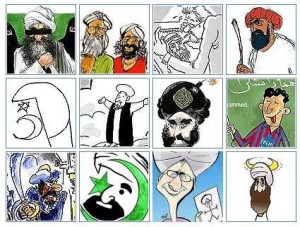 from this post in February 2008: No Surrender.  The image was linked to Human Events’ article Muhammed Cartoon Gallery of 2/2/2006 where all the full size cartoons can be found.

Needless to say I am not going to take this down. I contacted a few people about it and was advised to report it to the Chilling Effects website, which I did. I was told that perhaps the worst case scenario of not complying with the request would be that I could never travel to India. The other worst case scenario was that I would become the next Salman Rushdie. I really doubt that one since others, far more prominent than I, have published these images as well.

I do hope I won’t have to go into hiding.

I’d like to know if anyone else received one of these notices. Please let me know, either in comments or by email to kimsch at this domain.

Thanks Howie for the link!

Kyros from Report on Arrakis linked. Thanks!

What a strange weekend for Independence Day. Saturday was rainy and relatively chilly. Sunday was much warmer and mostly cloudy.

Still, the turnout at the Chicago Re-Tea Party wasn’t too bad with the rain, and Taste of Chicago, and some mis-information that the Tea Party had been canceled (a different one had). 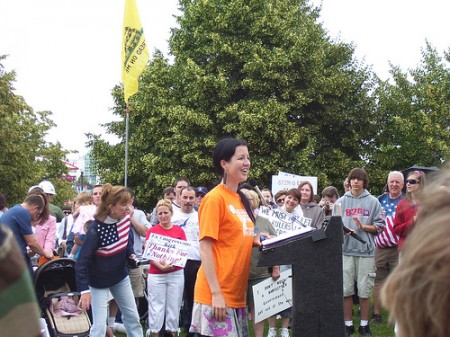 And Happy Birthday to Nancy Reagan and George W. Bush!

I almost forgot, when we were leaving the Chicago Childrens’ Museum there was a family arriving. Mom was dressed in a full black burqa. The daughter (about 4-5) was dressed in headscarf, tunic and loose trousers. The father and the boys were also wearing religious garb, tunics and hats.

We won't do it anymore…