This has been a strange week. Ed McMahon, Farrah Fawcett, Michael Jackson, and Billy Mays all gone. Ed and Farrah had both been quite ill for quite some time. Michael and Billy were both almost 51 and died suddenly. Michael would have been 51 at the end of August, Billy on July 20th.

As Jim Lindgren over at The Volokh Conspiracy put it “Congress Votes to Change the Weather“.

The idea that a government of one country could appreciably change the world’s climate over the next 40 years is the ultimate hubris. Legislators may think they are God, but they’re not.

He also quotes Maxed Out Mama:

Let’s hope it can be stopped in the Senate. Even if it is, our nation has lost something here, and that something is the principal legislative body’s grasp on reality. It is as if the House of Representatives suddenly passed a vote to reduce gravity by 10 percent in order to lessen the costs of obesity to putatively cut Medicare costs in the future. Truly amazing.

Did the EPA suppress a report that questions anthropogenic global warming prior to this huge assumption by 219 people that they could change the weather by legislative fiat?

There are inland Viking settlements that were ports when they were founded. The icy island known as Greenland was named that because it was green when it was discovered. Both of these examples show that the earth was much warmer in the past, during the time of humans, but well prior to SUVs.

Billy Mays was found dead this morning at his home in Florida. He was 50 years old, he would have been 51 on the 40th anniversary of Man’s first steps on the Moon, July 20th.

Our condolences and prayers go out to his family and friends.

May the Lord bless thee, and keep thee:

May the Lord make his face shine upon thee, and be gracious unto thee:

May the Lord lift up his countenance upon thee, and give thee peace.

The Cap and Tax Bill

Hubby and I called and emailed our representative prior to the vote on the bill to tell her that we wanted her to vote no. Hubby had called, and I had emailed. Then Friday, Hubby emailed her again. She still voted yes. Following is the text of the email that Hubby sent:

I left a message yesterday regarding my desire for you to vote no on two legislative matters, National Energy Tax Bill (Cap and Trade) now under discussion and Healthcare reform coming up soon.

With the healthcare measure I am concerned with the strong possibility that we are revisiting the mistakes of the “Great Society”  which gave us generations of welfare and the corresponding debt to the nation and damage to the family structure it created. Government participation/control will most definitely lead to a single payer system creating the same damage to the nation. Perhaps Congress should consider tort reform so doctors are relieved of the need to order unnecessary testing to cover their backsides and possibly reducing their malpractice liability costs.

With regard to Cap and Trade, I am watching C-Span at this moment and I am appalled at the behavior of your colleagues. A bill is not present on the floor containing at least 300 pages added in the middle of the night. What I am seeing is a food fight by individuals unworthy of the role of dog catcher, much less responsible for crafting laws that will ultimately impact everyday Americans.

Please do the responsible thing and save myself and the rest of your constituents the crippling tax and living expense increase to obtain a dubious .01 degree reduction in temperature in the next 91 years. We see this argument day in and day out, and to be frank, the data driving the debate is a statistical outlier when taken in context of the age of this planet. One century of data is insufficient to predict global patterns that typically span thousands to tens of thousands of years.

I welcome your feedback and trust your vote will reflect the will of your constituents and the ideological path of your colleagues.

I don’t know how much writing and calling our Senators will do. We’re stuck with Dick Durbin and Roland Burris…

Farrah Fawcett and Michael Jackson both passed away yesterday. Both too soon. Farrah after a long battle with cancer at 62, Michael after a sudden heart attack at almost 51. Hubby is only a week or so older.

Our thoughts and prayers go out to their families and friends.

May the Lord bless thee, and keep thee:

May the Lord make his face shine upon thee, and be gracious unto thee:

May the Lord lift up his countenance upon thee, and give thee peace.

Yep, he (the guy from AARP) did say that.

I have the opportunity to introduce the leader of the free world, our president, our beloved president, President Barack Obama.

Is “Dear Leader” so far away?

It’s been busy again. I got a new laptop on Thursday at a really good price and have been busy transferring stuff from the old laptop to the new. It’s been nice to be able to take my time with the file transfers instead of trying to salvage what I could from a fried drive. I am now also getting used to Vista versus XP…

Saturday was the opening of our village Festival and our Scouts were part pf the opening ceremony along with members of the US Armed Forces, one each from Navy, Marines, Air Force, and Army (go Army). 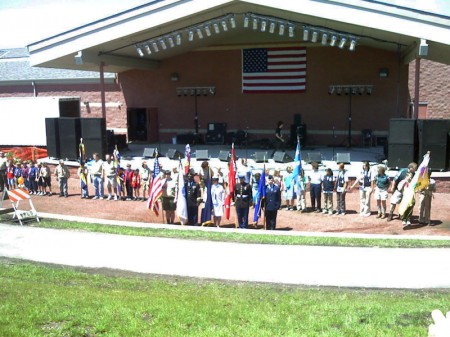 On Fathers’ Day we went to go see Up.

Loved it. We decided not to see the 3-D version because The Little Guy has been known to get a little scared when things “come at” him from the screen. We’ll watch the 3-D version when it comes out on DVD. There’s a really cute short film, Partly Cloudy, before the movie. Previews for Cloudy With a Chance of Meatballs look great.

Cloudy with a Chance of Meatballs Trailer (couldn’t embed) 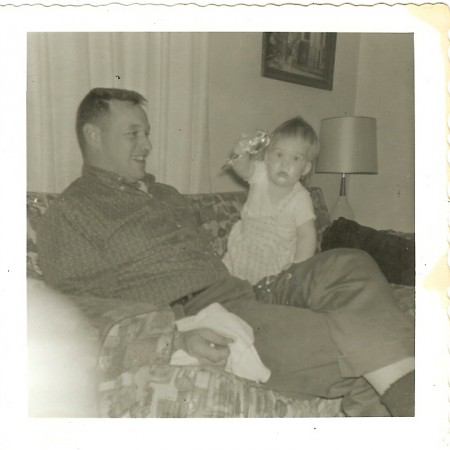 Dad and me and that’s probably Mom’s thumb in the bottom left corner.

Happy Birthday to ME!

I’m trying to decide what to order in for dinner.

Ann Althouse has an interesting question on a recent Gallup poll.

Ed at Hot Air asks, “Did Iran concoct election results before the election?”

We had a busy weekend. Saturday at Six Flags went beautifully. It rained all morning so we went at 1 pm and there were no lines even though the rain had stopped. It was an amazing Saturday. We got to ride so many rides. The guys had no lines for the rides they love, Superman, Batman, Dark Knight, Iron Wolf, Viper, Demon, Whizzer… Even the smaller rides had no lines. Straight on the bumper cars. Amazing. Sunday was a day at the Forest Preserve for a cousin’s high school graduation party. The day was sunny and upper 70’s, lovely weather. Kites were flown, hot dogs were eaten, fun was had by all.

Absolutely beautiful! Kudos to the photographer.

You have to click the link to see them…