Not Too Much of a Surprise

Of course he’s doing it for his survival as a U.S. Senator. Pat Toomey is too close to unseating him in the Republican primary in 2010. So, instead, he’ll give the Republican nomination to Toomey and run against him as a Democrat.

He’s been more Democrat than Republican for years, so I guess this is him finally telling the truth about his ideology.

He’ll be stepping on a lot of toes with this too. With his nearly 36 years in the Senate, he might take over a chairmanship or two. Displacing the current holders of those positions.

And what about the Democrats that were going to run in the Democrat primary? Will they still want to challenge Specter as a seated Democrat Senator? Will they quietly drop away so as not to interfere? Will they be happy about it?

Note to all Republicans who switched to Democrat to vote in the Pennsylvania Democrat Presidential Primary. Get thee to the county clerk’s office or League of Women’s Voters, or the DMV or wherever one needs to go to switch registered parties. Get there and switch back to Republican.

Of course, one could stay a registered Democrat through the primaries of 2010 just so you could vote for whichever Democrat will actually mount a primary challenge and make him lose that!

Update: Arlen Specter just said that the right has moved further to the right. Mr. Specter: The right hasn’t moved. The left has. That makes it seem as though the right is further to right, but it’s just a matter of perspective.

Yesterday we finally got to see Doubt with Meryl Streep, Philip Seymour Hoffman, and Amy Adams. I was somewhat afraid that it would be a Catholic bashing movie. A movie that makes the assumption that all priests are pedophiles or some other such nonsense.

I was quite pleasantly surprised that that wasn’t the case. The movie was quite well done, and Meryl Streep’s performance was outstanding as much of her work has been. Amy Adams as Sister James, a young nun, was also quite good, somewhat torn between her liking of Father Flynn and her subordinate role to Meryl Streep’s Sister Aloysius Beauvier, principle of the school.

For the Teacher Appreciation Luncheon today: 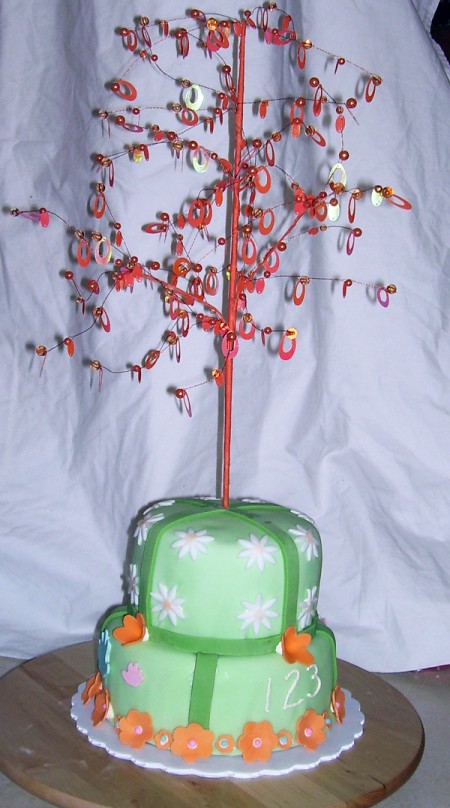 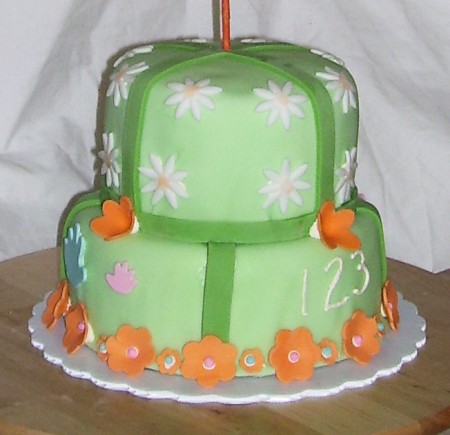 Close-up of just the cake

Busy weeks ahead! Which is fun, but also exhausting.

Last week was the Chicago Tea Party on Wednesday, Scouts Thursday, PTO Movie Night Friday, Six Flags Great America on Saturday, and cooking a turkey and cleaning house on Sunday. And then there’s still SPRING CLEANING to get all the dust off the high places… and to wash everything on top of the kitchen cabinets as those items get grease and dust built up over time…

I have a cake to make for Friday, for a luncheon for our teachers at school. Chocolate Lollipops too. Tomorrow I go on a field trip with The Little Guy’s 2nd grade class to the Milwaukee Public Museum. That leaves just Wednesday and Thursday for most of my cake work. Since I’m not Duff Goldman, and I don’t have a staff to help, I have to do all the work myself – baking, icing, decorating… But I love it.

Susan Boyle – Cry Me a River

From a charity recording made with the local newspaper, The Daily Record, back in 1999

Stills from Britain’s Got Talent

We met Anne of Backyard Conservative – she got a shot of us with our signs: 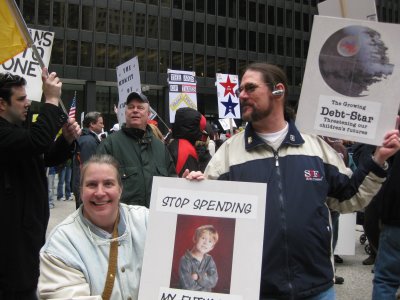 I am not that short, I was sitting on my Rollator rolling walker thingy that has a seat. I wouldn’t have been able to stand that long, but sitting right next to the stage was fine.

Here are the two signs we made for the Chicago Tax Day Tea Party today. We’ll be there, watch for us! 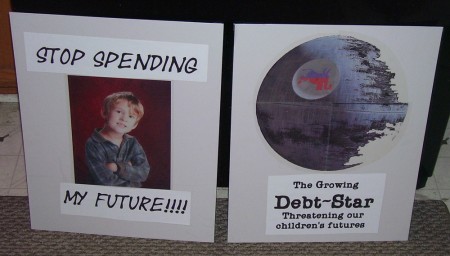 Candies and cakes and good food makes one tired.

Wednesday is the Chicago Tax Day Tea Party. I am planning on going. I will take pictures as I can. 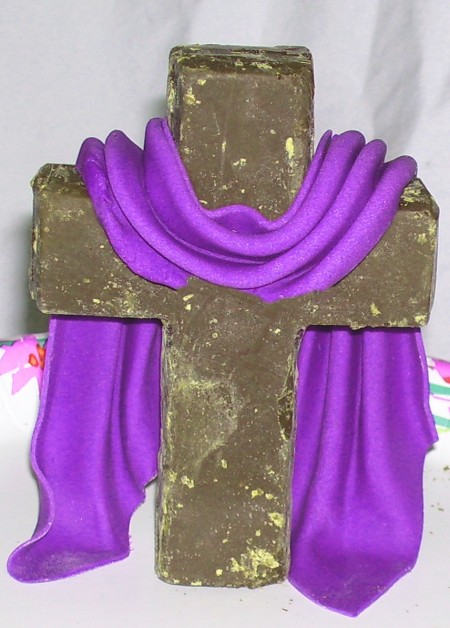 Found Mike’s Harder Lemonade (must be 21 to enter). It is definitely harder. And quite good.

Woke up to snow again today. Started yesterday afternoon. It started as sleet, then was sleet mixed with snow, then went to snow by itself. Streets were okay, but grass, roofs, etc were covered once again. Just not as bad as it was last Sunday.

I’m working on designing my Easter cake. Making some gum paste flowers and deciding what to  bake. By that I mean what shapes to bake (rectangular, square, round) and how to assemble them and shape them after that. I will post pictures of the final product, and perhaps some intermediate pictures as well as I continue on my new journey baking cakes.

We saw a few good movies this weekend. Marley and Me is cute. Seven Pounds is really sad, but very good. Will Smith is such a good actor. Remember a box of Kleenex for Seven Pounds. We also watched a film called What Just Happened with Robert DeNiro, Robin Wright Penn, John Turturo, Stanley Tucci, Bruce Willis (as himself), Catherine Keener, and Sean Penn (as himself). It’s a strange movie about the film industry in Hollywood. We do get to see Sean Penn die many times during the course of the film (as a result of watching the ending of the film within the film several times).