It’s the first official day of Spring Break today. Yesterday we woke up to lots of snow. All the kids off school and there’s a lot of snow. I see snow people…

Six Flags Great America here in the land between Chicago and Milwaukee is opening up on Friday. Yep, Friday. Weekends only until Memorial Day weekend, but it’ll be open. They have a new water ride called Buccaneer Battle, where you are in a boat with water cannons and you shoot other people as you go on the winding path of the ride. That, I’m sure, won’t be open this early. Especially with all the snow that’s on the ground today.

We’ve had season passes for a quite a few years in a row now, so Six Flags sent us our season passes for this year in the mail. With pictures and everything. Definitely convenient. No lines, just go in. Yay! With the snow we got overnight Saturday to Sunday though, I don’t know if we’ll go for opening weekend this year…

My sister has decided after seeing the cake I made for my cousin’s baby shower that I am now the official cake baker. She wanted me to make a lamby cake and a bunny cake for Easter. I don’t have the molded cake pans to do that (and don’t have the funds to purchase said pans) so I’ll be making some kind of Easter cake, just not molded lambs covered in coconut wool or a molded bunny. I may try to carve a bunny and put it atop a sheet cake, but we’ll see what happens. I will post pictures once I have it finished.

If the AIG employees who were supposed to get the “bonuses” were only paid $1 a year (with the assurance that they would receive these “bonuses”) couldn’t they sue because they weren’t even paid minimum wage? Even at a normal 2000 hour work year, $1 comes to $0.0005 per hour. I think that’s a helluva lot less than minimum wage… 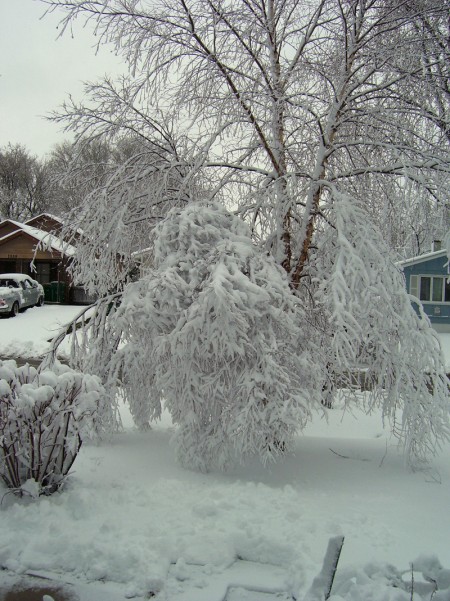 Today I have to in for a routine mammogram. I’m not expecting that they’ll find anything there that shouldn’t be there, but a little prayer that there won’t be anything to find wouldn’t hurt, now would it?

It’s the start of a busy week for us. Last week of school before Spring Break (and since Good Friday and Easter are not in the week’s break, it is Spring Break and not Easter Break to me at least). Book Fair is this week, as are conferences. Friday, our Cub Scout Pack is having our Blue and Gold Banquet and four of our boys will be earning their Arrows of Light and will Cross Over to Boy Scouts. Congratulations boys!

It’s a gloomy, rainy, day. Cold too. So I’ll work on injecting a sunny attitude into the day!

Today was my cousin’s baby shower. I made the cake and cupcakes. 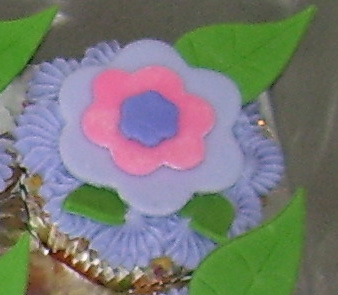 Two views of the cake: 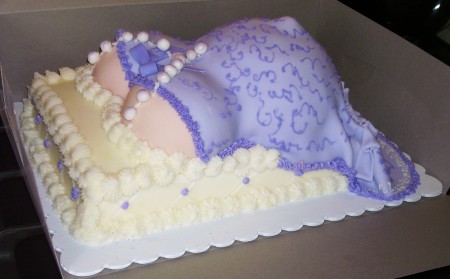 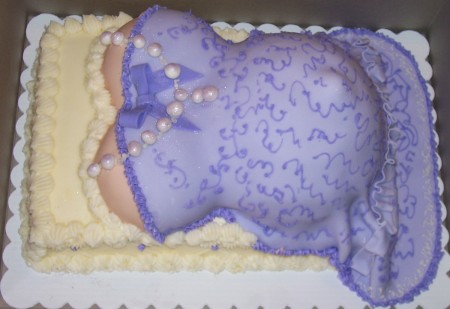 The cake was a sheet cake cut into two layers with raspberry and butter cream filling and butter cream frosting. The belly and boobs were baked in metal bowls and set on a cakeboard cut to fit. They were then covered with butter cream and fondant. The darker purple is butter cream too, but royal icing could be used. The pearls are fondant with an edible pearl powder  brushed on. The belly button is a ball of fondant set on the butter cream covered belly before the “dress” was laid on.

Corned Beef and Cabbage is in the (green) Crock Pot. Well, the corned beef, onion, carrots, celery, and potatoes are. Cabbage later so it stays a lovely green instead of going gray.

Corned Beef and Cabbage is an American St. Patty’s Day tradition, but it is Irish-American and that doesn’t make it any less Irish.

We found some O’Hara’s Irish Red and an O’Hara’s Stout at a liquor store in Wisconsin. And Hubby has some Guinness Draught in bottles too, so we are set for celebrating at home tonight! Slainte!

Oh my. Yesterday was IEATAPeTA day. I did have some lovely pork loin chops that were sprinkled with a bit of Target’s Market Pantry Moroccan seasoning and cooked in my non stick grill pan. We also had some braised apples and cabbage for a side dish. It was quite good!

Tomorrow is St. Patrick’s Day! Yay! Corned beef, carrots, potatoes, onion, and celery in the slow cooker in the morning. Add cabbage later in the day. Serve with slices or wedges of lemon. It’s sooo good with both the corned beef and the cabbage! It’s a flat cut corned beef, that cut is naturally leaner. The point cut has more fat. Remember to cut across the grain!

I also have to start working on the cake I’m baking for one cousin’s baby shower on Saturday. Raspberry filling, butter cream frosting. Still deciding on the decorations. Then a week later is another cousin’s wedding shower. Topped off with Spring Break in the final week of March. Busy times coming up.

Our condolences and prayers go out to Ron Silver’s family and friends. He died yesterday of esophageal cancer. I lost my Dad to that on Sept. 4, 2002. 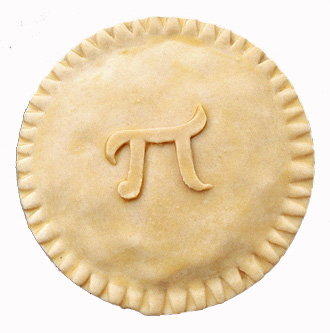 oh, and Wednesday Congress finally decided to join the party, on the 21st anniversary.

In the winter it’s hard to get the exercise I need, but when the weather’s nicer I can do a two mile round trip to pick The Little Guy up from school. This past week I walked on Thursday and Friday. Then on Saturday we walked the mall back and forth for a couple of hours. That added some exercise too. I was low on calories and protein already that day, so we stopped at Jamba Juice for an afternoon “snack”. I got a Pomegranate fruit drink with added boosts of protein, fiber, and weight loss formulas. Can’t do a Jamba Juice every day though…

At the doctor the week before last I found that I need to eat more in order to try to lose weight. Apparently, part of my problem is that my body thinks I’m starving and won’t let me lose weight.

I’ve never been a big breakfast person, and I’m mostly not hungry at lunch either. But the doctor told me to eat anyway. It’s hard for me to eat when I’m not hungry, but I have to in order make my metabolism work the way it’s supposed to.

For the past week and a few days, my breakfasts have been a Yoplait yogurt and a couple cups of coffee. I should be eating more than that, but I’m still not hungry in the morning and that’s about all I can eat at that time.

I smoked for years. I quit at the end of April 2006 – so it’s been nearly three years now. I think though, that I still have the eating habits I had when I smoked. When a cigarette (or two or three or four) was more important than eating.  When car rides were measured in the number of cigarettes smoked rather than the actual time in the car. When I worked full time in the early 2000’s and my ride to work was a three cigarette trip…

After I quit smoking I gained a little, not a lot, but I wasn’t losing anything.  I was drinking a couple Mike’s Hard lemonades in the evenings though. So I thought that maybe that was causing me to not lose. I stopped having a couple of drinks and didn’t lose an ounce. So I decided that I could have my Mike’s again!

Last year I was diagnosed with an ulcer. Since then, I’ve gained quite a bit of weight. Now I really need to lose, so here I go with the new “diet” that isn’t so much of a diet.

I have to eat more that I used to, more than I am used to.  But I also need to eat smart.

Kate introduced me to SparkPeople.com, a free site where one can put in weight now and weight you’d like to be. The site helps you determine how long it should take you to reach your goal, and gives you range of calories per day you should shoot for.  It also lets you know ranges for carbs, fats, and proteins. And if there’s another nutrient you should track based on your own particular needs, you can track that as well. If you need to track sodium or sugars, or what-have-you.

SparkPeople can also suggest meal plans and provide you with a shopping list. You can add your own recipes at SparkRecipes.com and the program will help you figure out calories, carbs, protein, fats, etc for your recipes, per serving.

Turns out, my cooking has been pretty healthy and not over caloric, but my dinners just haven’t been enough for me to have my metabolism work correctly. So now I’m having yogurt for breakfast until I can eat some more and bring the breakfast portion to a larger proportion of my food per day. Lunch is generally a 1/2 cup of navy beans with a 1/2 cup of brown rice, a little salt, a teaspoon of olive oil and a splash of vinegar or lime or lemon juice. Warmed slightly. It’s a really filling, tasty lunch for me. I’m not doing the meal plans from the site, but only because I can’t eat as much for breakfast and I don’t need the variety that’s built into the plans. I can eat the same thing for lunch every day without a problem. Or I could change it up by having two hard boiled eggs, chopped with 1 tablespoon of regular mayo, and 8 saltines for lunch like I did yesterday. It was quite good. The egg salad could maybe have had an extra teaspoon of mayo, but the tablespoon to 2 large egg ratio is good.

Ah well, we’ll see what happens as this goes on. Hopefully I will get my metabolism going and I’ll lose the weight I need to use.

He would have been 75 today. 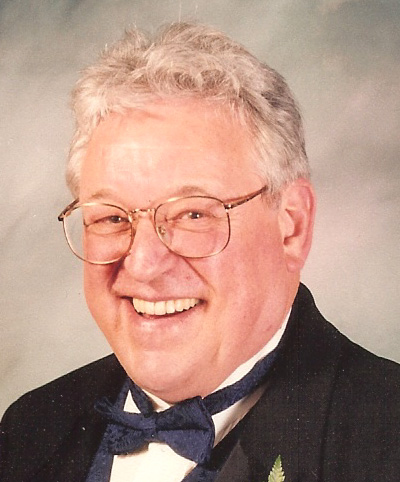 He is missed by all of us.

In the mail today was a Car Seat ID Card from My Precious Kid.

This is a very nice product. It comes with a self sealing Luggage Tag type clear plastic laminate cover. There is room for information on both sides to include a small photo of your child, address, emergency phone numbers, any medical conditions, doctor and dentist phone numbers, a thumb print, height, weight, and a medical release signature.

If you are ever in a car accident and can’t talk, this can talk for you and your child.

I’m using it with The Little Guy’s booster seat. Hopefully we’ll never have to use it, but it’s nice to have.

My Precious Kid has a ton of safety related products for your kids. Go take a look!

Check the comments on this post for a 10% off coupon code!