I’ve decided to extend the deadline through Friday!

Please send either a link to a recipe or the recipe itself to seakittens@musing-minds.com.

The carnival will be posted Sunday morning.

It’s Packzi Day. And the things I’ll do for Packzis. I woke up early after going to sleep very late. My dreams were all Twitter. Everything had to be 140 characters or less. And it was mixed up with Jewel Quest. So the Tweets were merging and disappearing and falling…

Then, when I got to the bakery at 6:30 am, as I was walking behind the car to get to the bakery entrance, I slipped on some ice and fell right on my knees and the heels of my hands. The left side got it worse than the right. And my left is the side that’s already injured.

I sat on the ground for about 5 minutes with my hands on my knees, trying to keep breathing through the pain. Two very nice ladies helped me get up.

Even though I had to hobble in, to the bakery I was going, pain or no. I was already there, and it’s Packzi Day! Luckily the line wasn’t too long that early. I pulled the tab for number 77 when they were calling 74. Yay!

I was extremely careful going back to the car with 3 boxes (1 King Cake, a dozen assorted Packzis, and one box of 2 prune Packzis for my mom) and I still slipped a little in a different spot, but I got my self home and in the house with my treasures.

Transportation Secretary Ray LaHood (R-IL) floated a trial balloon of changing the gas tax to  be predicated on mileage driven via the use of a GPS in every vehicle. This trial balloon has been floated before in Oregon and California, and is being floated again in Oregon now.

President Barack Obama on Friday rejected his transportation secretary’s suggestion that the administration consider taxing motorists based on how many miles they drive instead of how much gasoline they buy.

“It is not and will not be the policy of the Obama administration,” White House press secretary Robert Gibbs told reporters, when asked for the president’s thoughts about Transportation Secretary Ray LaHood’s suggestion, raised in an interview with The Associated Press a daily earlier.

Mileage can be ascertained by looking at a clever little device that is standard in every vehicle. It’s called an odometer. This device actually tracks the number of miles driven by the vehicle.

The deadline for submitting a link or a recipe for the Sea Kittens for IEATAPeTA Day Recipe Carnival  is on Ash Wednesday, February 25th, 2009.

The Carnival will be posted on March 1st.

Ash Wednesday starts Lent so fish Sea Kitten recipes should come in quite handy! Perhaps it won’t be the same old same old on Fridays.

So they’ve passed this massive spending bill without having read it. Who could have read it in the time they gave it? President Obama is set to sign it, unread of course. He’ll depend on his aides to tell him what’s in it. That’s the excuse he’ll give for not having read it either.

The Dems have had their wish list for 40 years and they’ve accomplished a lot of it with this bill. Most of what is in this bill should have been taken care of in the regular appropriations cycle, but maybe they were afraid that even with Dem control of both the legislative and executive branches that they wouldn’t get this stuff though in the regular process.

Then, too, this is supposed to be such a big deal. The President was able to get this huge spending bill passed so quickly, so soon into his administration. Yipee!

But he got no Republican support in the house, in fact he got bipartisan opposition to the bill. In the Senate, he got Specter and the Maine twins to help get it passed. But still, there were more than twice as many Democrats in opposition than there were Republicans in favor…

What about me though? I pay my mortgage on time every month. I didn’t purchase a house that was out of my range. But, being a responsible person, I’m stuck. I have a 1200 square foot ranch house on a 1/10th acre lot. I have a crawlspace (with a full cement floor, not just a splash coat) that has flooded a few times rendering everything I had stored down there unusable. With no garage and no basement for storage, we spend extra each month for a storage locker to hold larger items and now smaller items that we used to store down below. The new Christmas tree since the old one was ruined, othere seasonal decorations, the children’s school work (lost quite a bit of the older childrens’ stuff), etc.

I wake up every morning with a badly aching back. If I had one of those Sleep Number beds with the hospital bed effect (raising the back, raising the knees, etc. I could sleep better and not have as much pain on waking as I do now. But I can’t fit a king size bed (which is what I would need, as Hubby likes to sleep flat…) in my house.

My house also only has one bathroom. Oh, for a second bathroom, even just a half bath, for when the main bath is occupied. Even just an extra toilet somewhere with a curtain around it. The kitchen sink is fine for handwashing after use.

I would certainly love to get a bigger house with a basement and a garage. I would certainly love to have another vehicle. When the weather is inclement, Hubby leaves work early so I can take the truck to go get The Little Guy from school. If the weather is clement, I will walk a mile to the school and then a mile back with The Little Guy. I won’t let The Little Guy do this by himself yet. Too many scary people in the world. And eight year old boys are known for wandering and meandering and getting distracted during the walk home.

I’d love to have a bigger house that would allow me to have a dedicated office. One that would allow Hubby to have his own office too. A place where the kids can play, where The Little Guy could set up a train, or a Lego town and be able to leave it up instead of having to put it away all the time. A place where I could store my stuff without having to spend on an external storage area. A place for the Bowflex…

Oh, I hear that Hubby’s paycheck may have an extra $13 a week until next January when it goes down to $8 extra a week… W00t!

I wish the story had been more in depth, but it’s a start…

Today is a day to remember why you love him or her.

No Longer Legal Under CPSIA

These books are no longer legal under CPSIA. Children’s books printed before 1985 may be toxic!

Aunt Louisa’s was given to an Estella on Christmas Day 1879 by her “Pa Pa”.

I’ve had The Five Children and It, by E. Nesbitt forever it seems…

at night because I forgot to set something up… 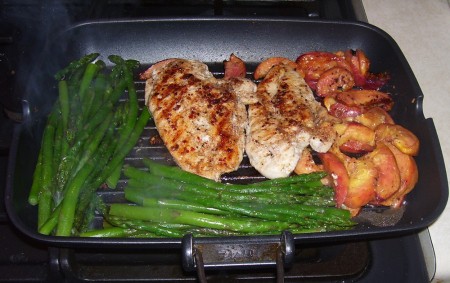 Chicken breasts, asparagus, and peaches all in the grill pan from Ikea. I used a moroccan spice blend from Target. Really good.