Sanjaya and Haley are safe, Chris Sligh is gone… Next week: Tony Bennett songs. Who will leave their heart in San Francisco?

VK is having a Sanjaya Edition Caption Contest! Tell her we sent you. 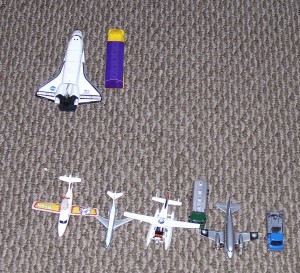 I went from the living room to the kitchen to heat some water for tea and unexpectedly came across this airport sitting on the floor in front of the refrigerator. I often come across an unexpected airport or parking lot in my home. That’s one thing you get when you have a six-year-old boy in the house.

You do not know me. But I am on the lookout for you. You are my enemy. And I am yours.

I will never forget the example of the passengers of American Airlines Flight 93 who refused to sit back on 9/11 and let themselves be murdered in the name of Islam without a fight.

I will never forget the passengers and crew members who tackled al Qaeda shoe-bomber Richard Reid on American Airlines Flight 63 before he had a chance to blow up the plane over the Atlantic Ocean.

I will never forget the alertness of actor James Woods, who notified a stewardess that several Arab men sitting in his first-class cabin on an August 2001 flight were behaving strangely. The men turned out to be 9/11 hijackers on a test run.

I will act when homeland security officials ask me to “report suspicious activity.”

I will embrace my local police department’s admonition: “If you see something, say something.”

I will protest your Jew-hating, America-bashing “scholars.”

I will petition against your hate-mongering mosque leaders.

I will raise my voice against your subjugation of women and religious minorities.

I will challenge your attempts to indoctrinate my children in our schools.

I will combat your violent propaganda on the Internet.

I will support law enforcement initiatives to spy on your operatives, cut off your funding, and disrupt your murderous conspiracies.

I will oppose all attempts to undermine our borders and immigration laws.

I will resist the imposition of sharia principles and sharia law in my taxi cab, my restaurant, my community pool, the halls of Congress, our national monuments, the radio and television airwaves, and all public spaces.

I will not be censored in the name of tolerance.

I will not be cowed by your Beltway lobbying groups in moderate clothing. I will not cringe when you shriek about “profiling” or “Islamophobia.”

I will not submit to your will. I will not be intimidated.