Sometime after Christmas of 2020, we moved a small flat-screen TV we had into the living room and put it on the mantle so my husband could have the news on while he was working. He’d moved his office there in March when my son and daughter-in-law moved from Illinois to be with us here in Tennessee.

After Thanksgiving of 2021, we had a decision to make: Mount the small TV so there would be room for our Christmas decorations or buy a better TV to mount and move the small one to the basement gym which was a plan for the small one before the kids moved in and we put it on the mantle. We just hadn’t gotten around to it yet.

I did some looking around online to see which TV might work best and found out that Samsung was having a sale on the Frame TVs at the time. We’d looked at them at Best Buy a few years ago just to see what they looked like and we were impressed by their slimness and that you could put up art or photos and not have a big black rectangle on the wall if you weren’t watching television.

So we ordered a 43-inch Samsung Frame TV. All the Frames come with mounting brackets and they mount flush to the wall, just like a picture frame. Ours also came with feet so we could, if we wanted, set it on a TV stand or other piece of furniture. You can also buy an easel to put the Frame on.

Mounting was really easy. There’s a template, tape it to the wall, make sure it’s level, drill through and then mount the brackets per the instructions. Plug the “invisible” cord into the back of the TV and hang it on the wall. The other end of the “invisible” cord plugs into the box that runs everything and can be 15 feet away from the TV. This is plugged into the power outlet and your cable, DVD/BluRay/Game System/Sound System are all plugged into this box.

We are really pleased with our Frame purchase. It looks elegant above the fireplace when not in use (and even when in use). We have a rotating set of artwork appearing on the screen.

Near the center, you can see the “invisible” cord. It’s pretty transparent and really does disappear into the background. The cord can also come out from either side of the Frame if wanted. The little bump on the bottom right contains the motion sensor which will turn the screen back on if someone comes into the room.

You can see here just how close to the wall the Frame hangs.

This is the box that controls everything. Our little cable box is just beyond it. You can just see the “invisible cord coming from behind Santa’s chair and swagging over to the brown cabinet.

If you’re looking for a TV that doesn’t look like a TV when it’s not in use I’d highly recommend the Samsung Frame TV.

How to Put on a Duvet Cover

Published October 4, 2017 | By kimsch
This is pretty ingenious and easy for only one person. 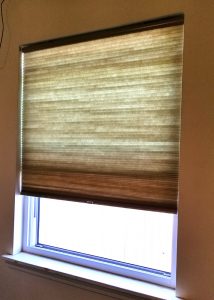 We’ve all heard of Spring Cleaning, but we need to do some Fall Cleaning too!

I recently bought some new blinds from Ikea that I just adore, but boy-oh-boy the old Venetian blinds were pretty gross with dust. And behind them in the window frame? Even worse!

Luckily, my friend Katie over at Housewife How-To’s® has a great Fall Cleaning Schedule Printable.

Published March 1, 2017 | By kimsch
Sometimes you can’t or don’t want to do some of the spring cleaning. Amazon Home Services can help in those situations!

I’ve been in my house for nineteen years now, but I remember when I had first moved in and my heating had gone out. I hadn’t really noticed it at first, the blower came on and the with the use of the stove and open blinds during the day the house had been retaining some heat. I just put on sweaters and put them on my kids and we used blankets. My dad came over and noticed how cool it seemed in the house and we checked the thermostat. It said we were down to about 55ºF.
This is when we want an excellent heating and cooling company that can come out on an emergency basis to get us back to where we needed to be. That gradual decrease in temperature, because it was so unnoticeable, was scary. The kids were small and didn’t tell me they were cold; probably didn’t even know to tell me they were cold. They were in those comfy, warm blanket sleepers at their ages. We were out during the weekdays; me at work and the kids at daycare and school. Weekends we were mostly at home. I’m so glad Dad came by and we were able to get professionals in right away to fix the furnace and get our heat back on.

Professional services getting the heat back on, especially when it’s so bitter cold outside is so important. Tune-ups of your HVAC system are a great thing as well. So is a check of your built-in humidifier (or installation if you don’t have one.) Getting that duct work cleaned out isn’t a bad idea either, especially if you have pets, small kids with small toys, or have been doing any work on your house.

Two weeks ago we were switching the contents of a couple of rooms and our first generation Dyson Animal DCo7 broke. It broke at the top of the Cyclone/dust cup where it attaches to the vacuum itself, near the power button. We have a Siberian Husky. He sheds. A LOT. So do the cats, but not as much.

We asked some friends for recommendations and did some research. We decided on the Shark NV753.

I just have to say “WOW.” After a quick and easy to assemble. I turned it on and it took off like it wanted to vacuum all by itself. The LED lights work very well and are a pleasant addition. The Dyson had no lights. The wand also has a light so you can see into those corners. I think the dust bin might be a tad bit smaller than the Dyson’s, but I’ll just empty it a bit more frequently. No problems there. It’s very easy to see when it’s getting full and very easy to empty. It picked up litter and dust in the laundry room like a champ. It picked up a lot of dust out of the rug in the Laundry room. So much so that I’ve already rinsed the filters and the bin. Very easy to do both. Now they just have to dry. 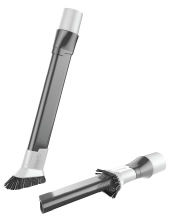 The TruePet ™ motorized brush also works very well, picking up the “ground in” pet fur quickly and easily. The crevice tool, called a Dusting Genie by Shark, has a brush that can be pushed to the operating end and used to loosen stubborn dust and cobwebs.

I bought this for my own use and was not compensated for it in any way. I am looking forward to using it more!

Published July 2, 2012 | By kimsch
I am writing a letter to my pal Katie at Housewife How To’s:

I am giving my kitchen a face lift, painting the Shaker style cabinets and putting some bead board panels in the insets in the cupboard doors. I’ve painted the lowers already, but the uppers have a coating of that greasy, dusty, stick gunk from cooking (and there’s probably a bit of that nicotine stick from smoking even though it’s been six years (Yay!) since I quit.

What’s the best way to get that gunk off the cabinets so the paint will adhere better?

UPDATE: We have an answer!

Published August 10, 2011 | By kimsch
I received a free sample of Downy Unstoppables in the “fresh” scent recently and just used it on my bedding this past weekend. I must say that I really like it.

The bedding smells fresh and the room smells fresh. Even with the windows open and fans on, the scent is lasting. The “fresh” scent is indeed fresh and it’s also got a slightly sweet hint of apple which is quite pleasant.

I’d like to see what the “lush” scent smells like. If it has some lavender in it, it might be good for my children’s bedding. Even if I don’t end up liking the “lush” scent, I do like the “fresh” scent and will probably buy a bottle.