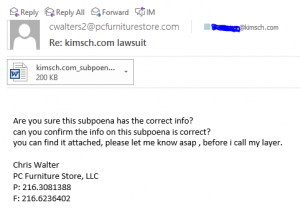 This is the third such email I’ve received in the past couple of weeks. The first two were ostensibly from two different bakeries.

If there is a real lawsuit against you, you will receive service by postal mail or in person. You will not receive emails. Especially from a supposed plaintiff. Since he’s going to call his “layer.”

There is a real company at pcfurniturestore.com. They have nothing to do with these emails.

So I Went to Walmart And This Happened…

An employee said no one had any idea why this Mariachi band was playing there, but it might have been a prank on someone.

Unexpected, but it made the Walmart trip fun.

Just had to pay $42 in sales tax for a $99 replacement iPhone! Called apple because I thought it was a mistake, but nope, it’s just the state of California charging tax on the highest allowable price. The rep told me the state was worried about getting its cut. I’m SURE the extra money will be well spent!

She was charged the tax on the manufacturer’s suggested retail price (MSRP) of the iPhone not the amount she was actually charged.

Does this mean that California customers can be charged tax on the “$110 Value” of the Yoshi Blue pan, the absolutely free ceramic mandolin, and the venting glass lid (just pay separate S&H) instead of on the $19.95 (plus S&H) that the firm actually charges?

According to Find The Best the California sales tax rate varies from 7.25% to 9.75% depending on location.

So the state can steal more from you by assessing sales tax on the “value” of the item rather than the price paid.

MSRP can be anything that the manufacturer wants. The suggested retail price is just that, a suggestion. Retailers will charge whatever they want to based on many different factors. There’s the wholesale price, markup, deciding if the item will be a loss leader or if the retailer just wants to reduce inventory and places the item on sale.

So, when is sales tax charged on “value” rather than “price”? When it’s California charging it.

I received a robo-call from Romney for President today. Actually I’ve gotten the same message again and again over the past few days. This message though, doesn’t say anything about why I should vote FOR Romney. It only purports to tell me why I SHOULDN’T vote for Santorum.

Of course, the transcription part is just…

“This is an urgent message from the running for President campaign in two thousand 6 Rick stand for him suffer(?) the worst defeat in decades binding-incumbent(?) Senator one Central and voted repeatedly to … on(?) today voted for billions in wasteful(?) … even the bridge to nowhere voted with the labor against the-right(?) door is locked and more. It-is(?) only stayed-didn’t(?) trust Rick Santoro. Why should Illinois. Thank you for your time. This call was paid for by Ronnie for President In…”