Back in November of 1997 I had two cats and two kids. I went to a company party and somehow my queen, Mally, got out. I called the county animal shelter and told them my cat had gotten out, and I was looking to see if she had been turned in there. I told them she was small and black with three white spots, one on her throat, one on her chest, and one on her belly. They said, oh yes, she’s here. So I went to get her. It wasn’t her. It was a tiny, little kitten who climbed up on the cat gym and ran up to my shoulder and sat there and purred in my ear. She chose me. She’s much larger in the photo below than she was when she first sat on my shoulder. She wasn’t any taller than my head sitting there the first time. 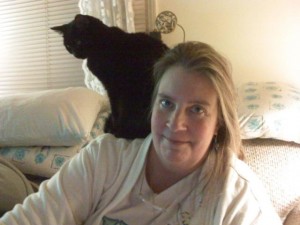 Bitsy on my shoulder

I went to the adoption center the next day to get her. I had to pick her up at the vet, they said she was being spayed. Now this was a tiny cat. She looked like she was six weeks old. The vet said she was six months old. Two days later I found Mally hiding under the neighbor’s house and I was able to get her to come out, and she never wanted to go outside again.

The tiny kitten liked to sleep on my chest, or my shoulder. At night she slept on my neck – it was a good thing she was so tiny. She stayed tiny even as she grew. She never got over six pounds.

We were going to call her “Just Cat”, but she was so small. I kept calling her an “Itsy Bitsy Kitsy” and Bitsy is what stuck. We sometimes called her Queen Elizabeth as well, since Bitsy could be a diminutive of Elizabeth and she certainly was a diminutive cat.

She was a cuddly cat, but only on her terms. She cuddled with the toms we had (Dodger – the one she first met when she arrived and then Duncan who came to us after Dodger took the Rainbow Bridge.) After a few years she cuddled with Mally a lot. It was funny, because they were both small, black cats.

After Mally took the Rainbow Bridge we adopted an adult gray pastel tortie that we named Liath (Gaelic for gray – pronounced Leah.) Liath was okay with Bitsy to start, but for the past several years Liath has hissed and growled every time she saw Bitsy. I’d have our little dog and Bitsy on my lap, and if Liath saw Bitsy there she wouldn’t come up. If Liath was on my lap and Bitsy came up Liath would immediately leave. I don’t know what her issue was, but she doesn’t have to worry about it any more.

Our animal companions do not live as long as we would like them to. All we can do is love them and cherish them while we are blessed with their presence.