Back in September, Walter Olson at Overlawyered brought a curious story to our attention. Apparently Kelloggs thought that the toucan in the logo of the Maya Archeology Initiative too closely resembled Toucan Sam of Froot Loops fame. 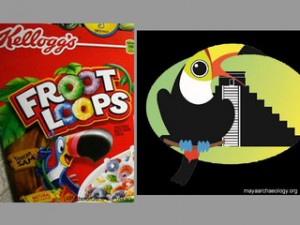 There’s now an update to the story. Kevin Underhill writing at Forbes tells us that there is a resolution:

At last report the two sides were trying to work things out, and it now appears that they have. The Battle Creek Enquirer reports that after several meetings over the past two months, the parties have reached a compromise: MAI will keep doing what it’s doing, and Kellogg will give it $100,000.

He finishes the piece with:

The fate of whoever decided it would be a good idea to send a cease-and-desist letter to some archaeologists in the first place is not yet known.

One Response to Toucans