But the perp might have thought they weren’t exactly stealing since they left something in return.

Almost the same bike. But not quite.

The Little Guy’s bike was over a year old and had a few dings as is usual for a bike a seven- and eight-year-old boy has been riding for around 15 months.

The bike looked like this with normal wear and tear: 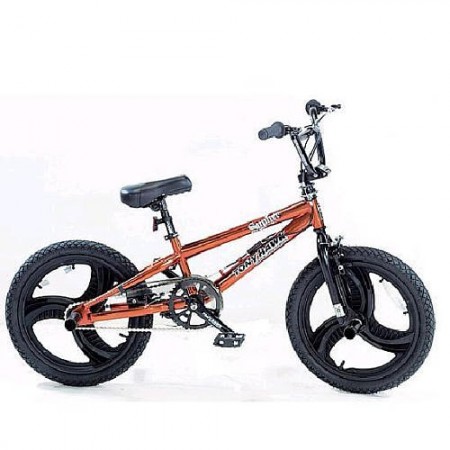 What was left in its place had no tires (but the rims had been ridden on), no reflectors, no pegs (there are four, two on each axle), and the bolt to hold the seat on was missing. The frame was also really banged up.

This was just so bizarre. They left a doppelganger in its place. It wasn’t our bike, stripped. It was a completely different bike of the same model. Like they thought we wouldn’t notice.

I had called Toys”R”Us to see if they had kept any serial number data on the bikes they sold, but they don’t. I didn’t really expect they did. The manager I spoke with said that once, when he was a kid, someone came into their back yard, stole their Weber Grill, and left a pair of Brewer’s tickets in its place.