Here’s a link to a video of Michelle Fields interviewing Robert F. Kennedy, Jr. at the People’s Climate March in New York City over the weekend. 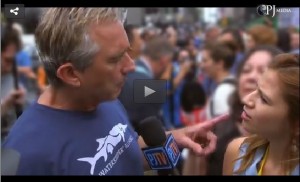 He talks about the Evil Koch Brothers™ quite a bit. It’s amazing how much those two men control!

Transcript below the fold.

MF: We’re here at the People’s Climate March in New York City where we had the opportunity to speak to Robert F. Kennedy, Jr. Take a look.

MF: This is a pretty large event, there were millions of flyers handed out, over four hundred busses the people filled coming here. Are you concerned about the damage to the environment that something like that would cause?

RFK, Jr.: I think this is… You need this kind of event to save the environment.  What I’m concerned with is the kind of damage that’s being caused by Exxon and the Koch Brothers and by, by oil wars that we’ve spent four trillion dollars on over the last ten years and the only thing between us and that kind of future is where the oil companies have subverted our democracy and are running our foreign policy and running our domestic policy is people power. They have the money on their side. We have the people on our side.  And we need the people here to show that they don’t want to take it anymore.

MF: Do you have an iPhone or an Android?

MF: You do? Are you concerned about the damage that the cell phone and electricity generation causes to the environment?

RFK, Jr.: Are you joking about this?

MF: No, I want to know if you’re willing to give up your iPhone? Are you willing? Why not? Doesn’t it start with people like you? They’re saying you want…

RFK, Jr.: It starts by changing the laws, so rationalize the marketplace so that we reward the most efficient forms of energy used and we punish the bad ones.

MF: Shouldn’t you lead by example?

MF: So are you going to give up your cell phone?

MF: Are you going to give up your car?

RFK, Jr.: Are you going to give up yours?

RFK, Jr.: Oh, I’m not going to stop using a cell phone and I’m not going to stop using… I don’t believe that we have to reduce, the, our quality of life in order to have a… in order to have a rational free market in order to… in order to stop the use of carbon. Or to divorce ourselves from a fuel that is destroying our planet. What we need to do is change the laws. It’s much more important to change your politician than it is to change your light bulb, or your cellphone, or your automobile. It’s much more important because right now the Koch Brothers own the Tea Party, they own the Republican Party, and they own a lot of the Democratic Party.  And if they were saying to us, listen, we don’t care what kind of car you use, but we’re going to make a law that says you can’t make a car in this country unless it gets 40 miles per gallon, or you can’t make a car unless it’s an electric car. And everybody’s quality of life can be maintained. We don’t have to go to war and spend four trillion dollars on foreign wars because the Koch Brothers gotta make higher profits from doing that. And, one of the biggest canards that the press has fallen for is that, is by blaming individuals for their own choices. That’s not the issue. The issue is what’s happening on Capitol Hill and that’s the thing you guys aren’t paying attention to. You’re letting these people, you’re letting the Koch Brothers run our country, subvert our democracy, corrupt our politicians, capture the agencies

MF: You can say the same thing about…

RFK, Jr.: Capture the agencies that are protecting the rest of us from pollution and destroying local democracy on every level. And that’s what you ought to be paying attention to rather than asking trivial and inane questions about whether or not some… what kind of car somebody drives or whether or not they use cell phones.

**Updated to change several instances of JFK, Jr. to RFK, Jr. (Thanks Debbie!)