Going to the Vet

Our pets are generally very healthy. Recently however, the Siberian has been scratching at his left ear. Then he scratches and cries. On Saturday I went over to try and look in his ear and found that it felt like there was an egg yolk in his outer ear. It seemed that it was almost as big as an egg yolk too. 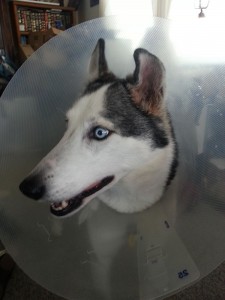 I looked some stuff up on the internet and found pet forums. There is a lot of information there. You can ask questions and get answers. They have pages for all kinds of animals, large and small. Of course, always check with the vet!

He didn’t seem to be too bothered by that, but his inner ear was still bothering him.

Yesterday we took him to the vet. They had an “all-day” appointment. With this type of appointment, the dog is brought in in the morning and then they take a look at him when they have a few minutes throughout the day.

He had a hematoma in his left ear. They said this could be from shaking his head or from scratching at it. He also has an ear infection. That’s what was causing the discomfort in his ear that he was trying to alleviate by scratching.

So, they drained his hematoma and used a little steroid to help keep it from refilling. They told us there’s a 60% chance it won’t come back and 40% chance it might. Another treatment option is to just let it be and it should resolve itself in a month or two.

So, for now the poor baby has wear what the vet calls an Elizabethan Collar, but what we (and the writers of UP!) call THE CONE OF SHAME.

You can see his poor ear in the photo. The doctor said that “crinkle” may be permanent. We think it gives him “character”.