So, Mayor Bloomberg got his wish and the New York City Board of Health voted to ban “sugary” drinks over 16 ounces everywhere except grocery and convenience stores. Because they’re trying to fight obesity. The ban only applies to “sugary” drinks, not diet drinks. Restaurants with self-serve fountains are limited to the 16 ounce size, but patrons can get their free refills. Now since this applies only to “sugary” drinks (I assume that’s drinks with High Fructose Corn Syrup and drinks with sugar) and not to diet drinks how can they enforce it ($200 fine) in a restaurant with a self-serve fountain? One would think a customer could order a 24 ounce “diet” and then go fill it up with a non-diet beverage. Or restaurants will have to drop all cup sizes over 16 ounces regardless of whether the customer wants diet or non-diet, effectively banning any soda over 16 ounces.

But, as the ban does not include grocery and convenience stores, you can still go get your Big-Gulp at Seven Eleven. And your huge Slurpees too.

Sugar contains 15 calories per 4 gram serving (1 teaspoon). I can make a 16 ounce cup of iced tea and use 2 teaspoons of sugar to sweeten it. That’s 8 grams of sugar, 30 calories. I could have that same tea at 20 ounces and still only use the 2 teaspoons of sugar.  I can’t buy a sweetened tea with that low a calorie count. High Fructose Corn Syrup, in most of our sweetened “sugary” drinks has 53 calories for a 19 gram serving (1 tablespoon [equal to 3 teaspoons]). Why can’t beverage companies make a lower calorie, yet non-artificially sweetened beverage? Pepsi came out with Pepsi Next a lower sugar beverage. I was excited. I thought perhaps they’d just lowered the sugar/HFCS content. But no. They lowered the sugar/HFCS, but added in artificial sweeteners. So it became a kind of “half-diet” drink.

Restricting the size of a “sugary” beverage isn’t going to change people’s behaviors. It isn’t going to stop obesity. It isn’t going to start a “national dialog”. And it’s not really for people’s health. It’s for power. We can do this so we will. Mayor Bloomberg would force chefs to not use salt in cooking. He’s banned trans-fats, but it was the government that insisted on using trans-fats in the first place. Supposedly they were “better” for us. The prevalent use of HFCS is a result of government policies as well, farm subsidies and sugar tariffs.

Maybe soft drink manufacturers should add fiber to all their drinks. That might alleviate the problem listed in the article:

While plenty of foods contribute to the problem, some experts believe soft drinks deserve a greater share of the blame, in part because the body doesn’t scream, “I’m full!” when someone downs a 32-ounce soda, even though it has more calories than a typical fast-food cheeseburger.

There are tasteless, colorless, non-thickening fiber powders that can be added to beverages that should not affect the taste or mouth-feel of any soda pop.

Senator Schumer was also in the news this week regarding laundry detergent pods (via Overlawyered). Apparently the brightly colored detergent pods look too much like candy and children are eating them. The New York Daily News tells us that 40 children in the city eaten them since April. Some had to be hospitalized. Sen. Schumer tells us that “200 cases had been reported to poison control centers nationwide as of May, but that figure jumped to 1,210 by the end of June.”

If there were only 200 cases “as of May” and 1,210 by the end of June, we’re looking at an increase of 1,010 in two months (assuming that “as of May” is the beginning of May). That’s a 505% increase in a very short period of time.
S0me of the stories mention 15-17 month old children eating these pods. They also mention kids swallowing the pods. They’re small, but not small enough to swallow. They smell like perfume, not candy. I haven’t tasted one, but I’d assume that one taste would put me off taking any more in. 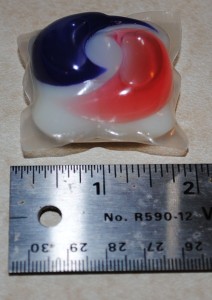 And where are these parents? Why aren’t the pods kept out of the reach of the children (especially toddlers)?
As I commented over at Overlawyered:

I’m sorry Mr. Schumer, but I really don’t need the government to be a parent. If I were single I wouldn’t need the government to be a husband. I, and most of the people I know, are perfectly capable of taking care of ourselves and keeping ourselves and our children reasonably safe. Nothing is 100%, nor can anything ever be so. Stop trying to make it so.

But it’s not really about health or safety, it’s about power. “They” know what’s best for us and we’d better just roll over and do as we’re told.