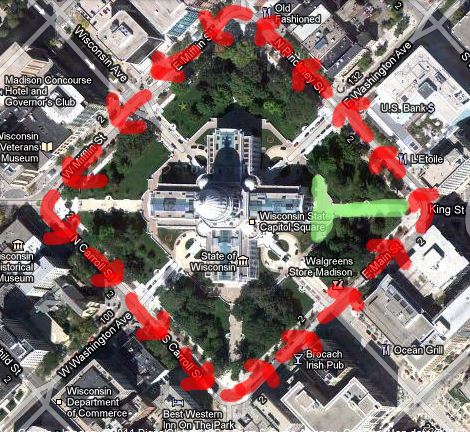 We had to cross the parade in order to get to the Capitol grounds. And when we got into the light green area, we couldn’t get very far.

When we were leaving, we first thought to try to get something to eat downtown, but it was a madhouse. We actually walked in the “parade” up to the north end of the square, but decided it was pretty useless. So we went back mostly down the sidewalk as we were going clockwise and the crowd was going widdershins. Then we had to cross the stream at the east corner so we could get to the underground garage our car was parked in. When we got back to the car, an empty Gatorade bottle was balanced neatly on the bumper under the Gadsden Flag sticker…

We talked to quite a few people while waiting there, in the middle of a motionless crowd, not able to see anything.

I have some photos at flickr. There’s not much because it was so hard to get anything being as crowded as we were.